ARE YOU READY TO DE-MARKET?

By alfonso.fernandez@coop.org | 04.18.12
Spending more time and resources cultivating your most enthusiastic members may also mean spending less on your least active ones. “We have a lot of empty memberships,” says consultant Dave Dawson. “We estimate that as many as one in three members are costing their credit unions money.” Benign neglect is one thing; showing poor performers the door is another. Should your credit union shed its least profitable, least active members? Some say yes. Coe estimates that CoastHills has reduced its membership by about five percent over the past year through deliberate de-marketing efforts. De-marketed members shared a few characteristics: “In many cases, these folks had forgotten they had an account with us,” says Coe. “We gave them several options for re-engaging. Members who didn’t take action, though, were subject to inactivity fees and, ultimately, became inactive.” Consultant John Dolan-Heitlinger notes that de-marketing efforts can – and should – be handled with as much grace as possible. “I know one credit union that gave members the option of donating their remaining balances to a local charity,” he says. “That made everybody happy.” There is resistance to de-marketing, and it’s likely to come from your board of directors. “Membership numbers have long been a measure of a credit union’s success,” says Dawson. “It’s hard to let go of those members.” Though Dawson is an advocate for de-marketing, he also stresses that it be done systematically and with diplomacy. “It’s not about alienating anyone, just doing a better job of serving your members.” 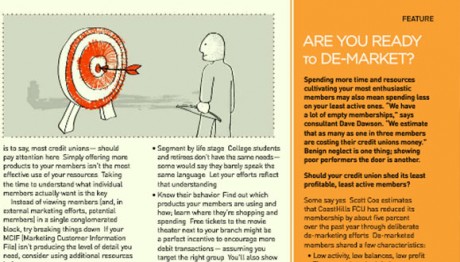