By CO-OP Financial Services | 03.31.18
For the first time ever, THINK 18 will feature a THINK Crashers program, bringing together rising stars in the credit union industry and connecting them with credit union leaders. Young credit union professionals, ages 35 and younger (or “35 at heart”), are invited to apply. Crashers will receive complimentary registration for THINK 18, shared lodging and meals throughout the conference. Apply now: The April 8 deadline is approaching fast. What’s a Crasher? Young CU professionals have been “crashing” some of the CU industry’s biggest events since 2010, when the first Crashers dropped in on CUNA’s Governmental Affairs Conference in Washington, DC. That year, The Cooperative Trust was formed in the spirit of credit union pioneer Edward Filene’s words, “Youth is too serious to become obedient.” The Cooperative Trust’s Crasher tradition flourishes today with help from Filene Research Institute and CUNA. In addition to Crashing to GAC each year, hundreds of Crashers have attended conferences hosted by CUNA and various credit union leagues over the years. CO-OP Client Business Executive Chris Olson crashed the Iowa Credit Union League’s annual conference in 2014. “I was working at a credit union then, brand new to the credit union world, and I had no idea what to expect,” Olson says. “I was just blown away by the whole movement. That this caliber of executives cared enough to invest in the millennial generation meant so much. I went back the next year and worked as a mentor to a group of 22 new Crashers.” Olson’s involvement with credit union leagues continues today: “I work with leagues in five different states now,” he says. “It’s a great opportunity to see what credit unions are doing nationwide.” Coastal Credit Union Outbound Call Team Manager Sara Portis competed for a Crasher spot at GAC this year – and won. “I was selected as Coastal’s CUware Protégé Winner (a program of the Carolinas Credit Union League) for 2017-2018,” Portis says. “The reward was to attend ‘Crash the GAC,’ which Coastal opted to pay it forward, which sponsored additional crashers. “Attending GAC as a Crasher really opened my eyes to what it means to serve as part of the CU movement,” says Portis. “We’re so focused on our jobs, our community and helping our members. That’s our silo, right? We do a lot of internal development at Coastal, but having the opportunity to attend GAC – having the credit union invest in me and want me to represent them – made me feel valued.” While there, Portis was also on hand to celebrate Coastal CEO Chuck Purvis winning the prestigious Herb Wegner Award. “It was an honor,” she says. Both Portis and Olson say Crashing inspired them and introduced them to a network of fellow young professionals that they still collaborate with today. Crashing helped them see themselves as part of a greater, purposeful movement. THINK 18: Best Crash Site Ever? Are you a credit union rising star? Do you know someone who is? To apply for this year’s inaugural THINK Crashers program, visit the Crashers Events page. Things to know: “No matter what your title is or how many years you’ve been doing your job, being a Crasher can open a lot of doors,” Olson says. “A lot of things I’ve learned about the industry came from getting that wider perspective.” Apply Here 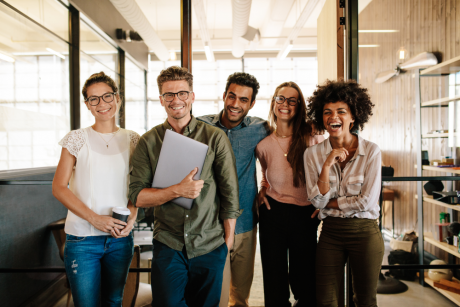