By CO-OP Financial Services | 07.29.18
"Today’s digital age demands you focus on the consumer first and build backward. It’s the opposite of what we have traditionally done. In the digital age, the most important piece is the humanity.” Chris Skinner is best known as an independent commentator on the financial markets and technology trends through his blog the Finanser. Here he regularly discusses key issues and opportunities in banking and financial services, summarising research, white papers and other analysis that is topical for the day. At THINK 18 he stated: “I describe myself as a troublemaker, and I have been a troublemaker for a long time. There is a reason why the most valuable companies in the world today are digital content companies. Information about money has become more important than money itself.” The business model of the typical financial institution does not fit well with the digital age, Skinner explained, because traditional banks push products through channels in order to get more customers. In the digital age, he said, the most important part is the humanity of the people, not the products or the process. “Uber and Airbnb are platforms that connect people with each other. I call it the apps, API, analytics revolution,” he said. “We have smart things that are connected to each other. Everything is smart – smart phones, smart refrigerators. Venmo was developed because one weekend a fellow forgot his wallet and owed his friend money. Teenagers are reinventing financial services. Coding is now as important in England as being able to speak English.” Businessware is where the next battleground will be, Skinner continued, noting it is expected one in three bank jobs will be automated by 2025. “Software is the new world. Trading will be reinvented by shared databases that are managed by technology. Clearing and settlement will save the financial industry $20 billion per year by not using paper.” In the last five years there have been hundreds of billions of dollars invested in fintech companies, many of which are led by teenagers. As a result, Skinner said, every single process of financial services is being attacked by technology. “Some banks are adapting well, such as BBVA in Europe and DBS in Singapore. In the U.S., JP Morgan Chase is investing heavily in digital,” he reported. “Many bankers believe their business model will not change because of digital – that it will just be banking as usual but a little bit faster. I think that is the road to ruin.” Experience the complete speech below. And register for the upcoming Roadshows and THINK 19. 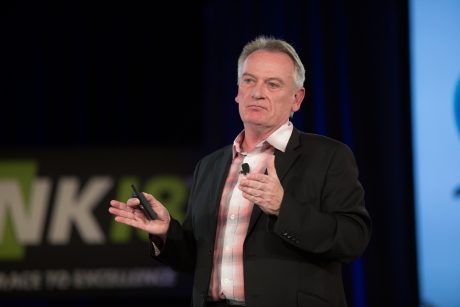