Whither change? In the months leading up to THINK 13, the CO-OP team spent a lot of time contemplating, debating and sketching out the implications of change in the credit union movement. From that experience, it quickly became clear that everything about change was – well, changing. We reflected on the pace of change, the scope and nature of it. We talked about how credit unions respond to change, and whether those responses have transformed in recent years. We looked at the advent of massive, disruptive change, and wondered whether it would supplant measured change for credit unions. And then we brought some of the smartest people we know together to talk about it. In THINK 13’s Disruption Challenge, six credit union pros and our panel of experts debated two critical questions: What kind of change faces credit unions? And what kind should credit unions create? The following pages contain some of the ideas and insights that went into – and came out of – that debate. We look at the two sides of the argument. We walk through some of the key points from the debate, and expand on a few of the issues raised. And finally we revisit an exercise for generating innovative ideas from THINK 13, so we can effect some change of our own. The Disruption Challenge ended in a narrow win for Team Massive, according THINK 13 attendees who cast votes. But consultant Lauren Pollak of Jump Associates, who facilitated the follow-up workshop on change, may have put it best: “It’s not good enough to just have measured change. It’s not good enough to just have massive change. We need to figure out both. We need to figure out how to operate our current businesses and how to set up for the business of the future.” 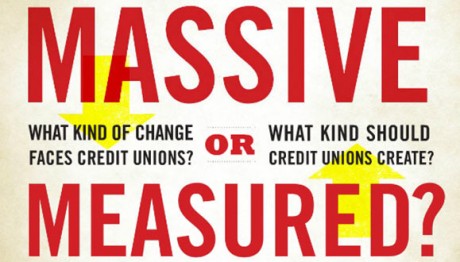