WHAT DID YOU THINK? THINK STARTER CONFIDENTIAL

By Tony Hildesheim | 07.10.14
Last week we met Tony Hildesheim, Redwood Credit Union SVP of Information Technology and one of CO-OP’s first-ever THINK Starters. What’s a THINK Starter? This selected group of forward thinkers was hand-picked to contribute questions, feedback and discussion on site at THINK 14. They also committed to continuing their THINK journey throughout the year by applying their takeaways at the credit unions and by reporting on their progress along the way. We called Hildesheim at his office in Santa Rosa, Calif., to find out what he thought about his role in the THINK Starter pilot effort. Here’s what he had to say: Q: What was it like being a THINK Starter? A: Being a THINK Starter was an honor, plus I had the opportunity to participate in a panel. That was a really excellent experience. I enjoyed it very much. Q: We have heard a lot of THINK attendees say that having real credit union leaders on stage during those THINK It Out panels gave the discussions a new energy. A: The panels were an excellent addition, and I’m definitely not saying that because I was on one. I watched my counterparts and I thought, the voice of the credit union is actually being shared on stage with these experts. When you have people like Randi Zuckerberg or Kate Feather or Debbie Millman up there on stage with real people from the credit union movement, representing the movement, it gave a different dimension to the experience. I hope next year we can have more of that. Q: What else do you look forward to tackling at future THINK conferences? A: I’m really excited to continue the conversation about the national brand. I’m not sure I would call it a national brand – maybe a national experience. People get the idea of branding all mixed up. Q: Do you see hope for the creation of a national credit union experience? A: Yes, and ATMs might be a place to start. Most credit unions are worried about [featuring] their logos on their ATMs, but the members just want to find an ATM they can use. We need to worry less about our own logos and think about how to help members understand that their credit union is part of a large national network. That’s a huge issue. When you ask people who are not members why they don’t belong, they say, “I like the fact that Wells or B of A has ATMs everywhere.” They have no idea their credit union is part of a national network of ATMs larger than either of those banks’. If we can simply figure out how to make the national ATM network recognizable to members and non-members -- just that piece – I think that’s going to be a huge step in the right direction. Next, it is figuring out the national Credit Union Experience, and ensuring it is consistent. Finally, how do we ensure that we remember our roots as member owned organizations that serve the underserved, to help them fulfill their dreams, and then tell that story? See video of Tony on stage at THINK 14. 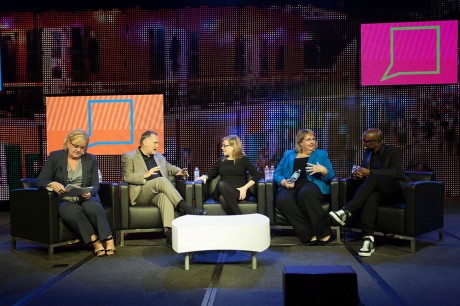