By alfonso.fernandez@coop.org | 07.22.18
Michael Phelps is the most decorated Olympic athlete of all time. He has 28 career medals, 23 of those gold. He competed in five Olympic Games, starting with the 2000 games in Sydney, Australia, when he was just 15 years old. Asked how he achieved such excellence, he said every person defines the term in his or her own way. “When I started this whole journey it was with the goal of breaking world records and winning gold medals. That is what I wanted as a little kid,” he recalled. “When I got there, I had to redefine my goals. Goals really drove me and made me as good as I possibly could.” From 2001 to 2006, Phelps was in the pool 365 days a year – even on his birthday or if he was sick – because he wanted to be successful. “I was a professional athlete at 15. I wanted to change the sport of swimming. To do so, I had to do things differently than anyone had ever done before. In swimming, if you take a day off it takes two days to get back to where you were.” Phelps was asked about being an “underdog,” because credit unions are the underdogs in the financial world. He said his sixth grade teacher told him he would never amount to anything, and during his childhood he was picked on and made fun of because he had big ears and shaved his legs. “Doubters have always fueled me,” he declared. “There is nothing more rewarding than jamming their words down their throats. If someone doubts me, I let them talk, but then I show them. I let my actions do the talking. There shouldn’t be a damn thing in this world that stands between you and what you want to accomplish, but you have to do the work.” Enjoy the full hour with Michael Phelps below. And register for the upcoming Roadshows and THINK 19. 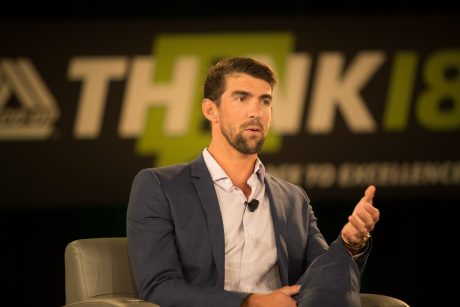